No results found for your query in the EU Count(er) Glossary SEARCH ENGINE.
Some suggestions:

I The selfless act of saving others’ economy or the unavoidable act of saving banks. II The fame of the word bailout came to Europe straight out of the US together with the crisis. 2k8’s overseas narrations clearly describe a fracture between Democrats and Republicans concerning the best way to handle the downfall of major national financial groups involved in the financial blackout. The responsibility for the failure of the financial market’s self-regulations was taken by the democratic side – with the promise of a fair redistribution of money between executioners and victims. Paradoxically, Republicans, namely Senator McCain, suggested an intervention of their favorite hand (see also Adam Smith), which should have punished those who irresponsibly invested their savings and later let the US economy resettle by itself. III The bailout burst into the European mediatic discourse, at first, in the form of loans to the bank system from sovereign state’s central banks and from the ECB. Later, bailout programs switched to billionaire parachutes for European economies from the IMF, the EC and the ECB (see also Troika), in exchange for public budget cuts, tax increases, austerity and neoliberal reforms, in order to put a patch on the bleeding states’ reserves in the aftermath of banks’ rescues. European bailout programs were ratified for Greece, Cyprus, Portugal, Spain and Ireland. By fall 2016, Spain and Ireland are the only two countries that seem on the way of recovering after their bailout programs. Once again, the different outcomes of these rescues illustrate how imprecisely designed is the PIIGS umbrella and how different the socio-economic situation is from country to country. IV Besides the financial meaning, the word bailout evokes three different realms: the one of surrender and abandoning, the one of danger and parachuting and the one of sinking and emptying. As a result, in economic terms the bailout, is a last chance, it is the desperate act of a government or a central bank to save its economy from collapse. When mass media audiences see the word bailout on a news banner, it is the equivalent of an “Eject! Eject!” red button on a pilot’s dashboard, a powerful transfer able to convey in the audience the sense of urgency needed to allocate billions of Euros.

Since the beginning of PIIGS_An Alternative Geography of Curating, one of the most important part of it has been the decision to constantly share links, materials, articles about artists or past exhibitions, essays on different issues, and, as most important thing, some books everyone has found as relevant for the researching aspects and discursive evolution of our project. So we decided to gather all them into one common bibliography which will, at the same time, define and represent our conceptual frame where working on together. We would say that “sharing” is one of the word of this project, this is also the reason why we activated the blog talking PIIGS as a tool of collective reflection for creating something that very soon is going to be materialized. END_OF_DOCUMENT_TOKEN_TO_BE_REPLACED

PIIGS_An Alternative Geography of Curating is not only an exhibition, neither is only an intensive program of talks, conferences, debates, presentations, discussions. It combines the two formats, working on a different level: re-desing the exhibition space as a study-space while confronting each other, discuss and grow. It is like you, as visitor, were allowed to enter in to a curator’s mind.
Along this intensive format goes a great screening program both on Friday and Saturday afternoon. The screening program will be held in the AUDITORIUM in Fondazione Sandretto Re Rebaudengo. 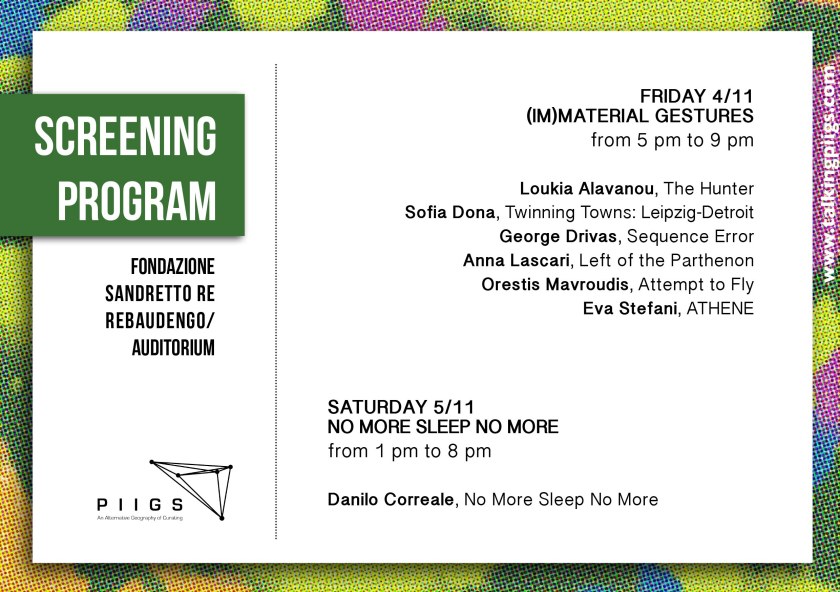 END_OF_DOCUMENT_TOKEN_TO_BE_REPLACED

Oliver Ressler (Knittelfeld, 1970), artist and filmmaker, lives and works in Vienna. Since 1995, he has exhibited in museums and art institutions all-overs the world, in ar/ge kunst (IT), Berkeley Art Museum (US), Museum of Contemporary Art of Belgrade (SCG) and he has taken part in many biennials such as in Prague, Moscow and Taipei.
His artistic practice is characterised by a complex and political use of video, from films applying different documentary formats to multi-channel video installations. His artistic methodology is based on an in-depth sociological analysis of the new challenges triggered by neoliberalism and on a clear final result. Several works focus on the contestation of the new economical and anthropological forms allowed by neoliberalism. END_OF_DOCUMENT_TOKEN_TO_BE_REPLACED

South as a State of Mind is a contemporary arts and culture magazine founded by Marina Fokidis in 2012, the fourth violent year of economic crisis. Fokidis launched the first issue two years after the foundation of Kunsthalle Athena, a flexible institution, close to the idea of the kunstverein, and interested in making contemporary art from Athens public.

South as a State of Mind has since become a platform, an “experiment to try to break the barriers of place through a magazine … and focuses on the concept and personality of the symbolic South.”
Rethinking the southern attitude means redefining new postures, new ways and ideas to conceive questions related to the identity of a nation-state. Since late 2015, South as a State of Mind has become the temporary official magazine of documenta 14. Four special issues will be published before the opening of the exhibition in Athens and Kassel in 2017; the diagonal that is connecting two poles, two seemingly contrary cities. Quinn Latimer, documenta 14’s Editor-in-Chief of Publications, and documenta 14 Artistic Director Adam Szymczyk are the editors of the current configuration of the magazine.

A History of South as a State of Mind and A Contemporary Reading is the panel that Michelangelo Corsaro, curatorial assistant, and Laura Preston, editorial assistant, of documenta 14 will present during PIIGS_An Alternative Geography of Curating. END_OF_DOCUMENT_TOKEN_TO_BE_REPLACED

The critical economic situation that the art system and the art market are going through, the precariousness of the artists’ work and their need to adapt to these new conditions gives us a new dimension that must be evaluated. From the Spanish universities of Granada and Nebrija, professors Marta Pérez Ibáñez and Isidro López-Aparicio are developing a research project which aims to analyze the current economic situation of the plastic and visual artists in our country. This is the first time in nearly ten years that a survey of this size is being held in Spain, a survey that so far has involved 1,100 artists, the most important primary source of information about the economy of the artists in our country, and a good example of the situation of this sector in Southern Europe. This research study aims to let us know what the situation of the artists currently is, how they are suffering from the economic recession, how they have changed their relationships with the art market and how their work is supporting the structures of the art system.

END_OF_DOCUMENT_TOKEN_TO_BE_REPLACED

A crucial question to ask is what happens when artists’ struggles at the years of financial crisis are entering the museum walls. Art and economic crisis has become a fashionable topic these days, much appreciated by a number of museums, institutions and foundations that have rushed to incorporate it in their programme, as part of their “struggle showcase vitrine” that tends to also include feminism or anti-colonial perspectives.

Assembling bodies in performances, public engagement projects, radical manifestos readings and community projects have been incorporated in most high-profile art institutions. The museum, in its perceived status of existence as public good, has always been a place where radical ideas found a place to flourish without avoiding at the same time the risks of institutionalization. Nonetheless, it is important to take a closer look at the terms under which these ideas are being incorporated. Is the material artwork simply replaced by the physical presence of the artist without challenging the subject-object relationship, adding other elements to be capitalised? END_OF_DOCUMENT_TOKEN_TO_BE_REPLACED

I Type of mortgage (i.e.: loan) generally conceded to high-risk borrowers, with larger-than-average risk of defaulting on the loan. Being the interest rate highly volatile, and having borrowers very limited capacity of payment, subprime mortgages have been the main cause of the U.S. (and European) recession in 2007-2008 (see also: housing bubble). END_OF_DOCUMENT_TOKEN_TO_BE_REPLACED

For conceptual reasons related to the article’s issue, this paper it is proposed in two languages, Italian and English (Italian version below)

One of the crux of PIIGS An Alternative Geography of Curating project is certainly the debate; the tool of comparison between different point of view, different practices and curatorial education, different cultures and languages.
Through the on-line platform, TalkingPiigs, we attempt to create shared language and a code that, in the course of time, became the common field where to reflect on. During the meetings of November and through discussions, talks and projections this dialogue will carry on; it will materialize in a concrete form also through an exhibition that in a dialogical way will try to create a narrative between the different curatorial project presented by each of the five nations involved. END_OF_DOCUMENT_TOKEN_TO_BE_REPLACED

WITH THE PARTICIPATION OF